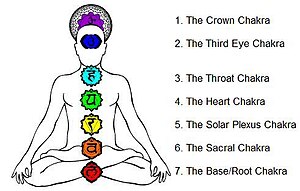 The Seven Chakras in the Human Body

In Sanatan/Hindu and tantric/yogic traditions and in other belief systems, chakras are energy points or knots in the subtle body.

The chakra system is an invisible, abstract concept that exists to explain the energy system of the body. Many people do not believe it to exist, while many practitioners of various occult schools and religions use variations of the system to explain the deeper functions and bodily systems inside both the physical and mental body.

The system has an energy given different names by many schools of thought, such as qi/chi, light, wind, element, and prana, among others. This energy is powered by physical respiration, digestion of food, sunlight, and the energy of the inner mind's focus.

Chakras are usually taken to be a metaphorical and easy method of visualizing the bodily energy system for novices.

When a chakra or gland is underdeveloped, malfunctioning, or lacks nutrients, they work less optimally. As all chakras are dependent on each other, one failing causes the rest to stop functioning optimally. It's important to eat a complete and balanced diet of vegetables, fruit, seeds, and if meat-eating, animals which have lived healthy lives. Acidic food should be avoided as it affects the hormone production and gland secretes of all glands and alkaline food should be eaten to boost the chakra system.

Removing of any of the glands in the endocrine may have severe effects on the body's growth and progress. Removal of the testicles permanently removes the ability to reach the awakening Christian occultists believe Jesus attained in the New Testament. Removal of the pituitary will lead to a quick and agonizing death. According to this perception, it's crucial all people wishing to reach enlightenment don't allow bodily modifications through surgery, such as gender reassignment, as it permanently removes the necessary organs.

When the energy enters the body from the first chakra from diet and breathing and energy through the crown chakra as light, it must either be used or stored in the solar plexus chakra. When energy is correctly stored in the solar plexus, it will travel down to the testicles or ovaries as a chemical substance. The chemical will then help produce the substance which Spermatozoa travel in which is white, alkaline and smells like fish. How this works on women is still unknown. When the fluid from the prostate is saved and not used in sexual activities, it will travel as a fluid, back into the bottom of the spine. This fluid will then rise up, one vertebra per month over a period of 33 months towards the top of the spine. This process, though possessing many names, is most commonly called the kundalini, third pillar, or Christ consciousness. If the chakra system is unbalanced or blocked, most of this energy will collect in one place, leading to a distorted personality or uncommon habits. The blocked chakra which is also connected to the spine through nerve fibers, will block the fluid from reaching the top and the energy will leak out from that chakra's location. In most cases, the fluid will act as a healing agent on the specific chakra that is blocked and will then naturally heal it over time. The process can be sped up by meditating, researching and learning about the chakra system and eating a good balanced diet.

Masturbation is said to be one of these habits resulting from imbalance, as it drains this energy from the root and sacral chakras because of the amount of energy the body needs to produce life. How this affects women is still not certain as their menstruation cycle appears to be unaffected by this practice. It is known among freemasons that because of women's different genital organs, they cannot pursue enlightenment like the brothers of the lodges, thus membership for women is not allowed. The moon orbiting the Earth also strongly affect the tide as well as women's menstruation cycle, so it is unsure how this would work for women if the moon did not exist.

When enough energy has been conserved in the solar plexus and not wasted in sexual activity, the oily substance and energy travels up the spine in 33 steps over the period of 33 months. When the substance reaches the brain and the endocrine glands in the head, many stories tell about enlightened people and the bright presence of a Gloria around the head. It is however unknown what effects this has on the body as anyone who reached this stage has yet to come forward and let scientists and doctors do tests on their bodies. Due to the vast amount of tricksters in India and other regions, many so called enlightened people are caught using different stage magic methods to pretend that they do not need to eat, drink and show magical powers which can be explained with chemistry. Also most enlightened people from past eras do not have marked or mummified graves, so doing autopsy on their bodies is not possible.

It is personal choice whether or not to pursue this path as there is no evidence if this works and a lot of the teachings are metaphorical at best.

The chakra system also works as the intermediary between the spiritual/astral body and the physical body. Anyone with an unbalanced or unactivated chakra system may not progress spiritually, as the chakra system will bind one's consciousness to their physical body. This is one of the reasons many people have not experienced an out of body experience during their life; conditions while growing up and their current diet have caused imbalances in their chakral systems. One method for leaving the body involves turning all chakras one half lap counter clockwise to trigger a shock in the etheric body. If the body's chakras are not in balance and aligned, trying to turn them to leave the body will have no effect because one chakra being closed or blocked will prevent the etheric body to detach from the physical body.

Each chakra corresponds to a gland of the endocrine system. The 7 primary chakras, also known as the major chakras, are:

Because the chakra system does not actually exist until one understands it exists, it's initially very hard to work on one's own chakras without learning from a guru or reading an occult book. The New Age movement has been met with some criticism by other schools of thought because of the perception that it doesn't teach the correct methods for the unlocking and aligning of the chakras, which leaves many unbalanced and in the dark about spiritual awakening.

Instruction for seeing the chakras usually involves opening one's third eye and seeing the system in the mind's eye. The chakra system will work and affect the correct organs even if the subject is unfamiliar with the chakra systems as long as the colors and positions for the chakras are visualized in their correct place.

After successfully activating the imagination, visualizing the body and its chakra centers is fairly easy after a 10 minute session. From there, the chakras can be blasted with white light to clean them, spun faster with one's etheric hands, or closed to prevent external manipulation.

It's through visualization a practitioner can direct the flow and focus of the energy in their body. This energy can be used to affect physical things. Two naturally strong chakras are in the palms of the hands. These can be used to direct energy outwards or attract energy inwards by holding the hands towards a target object. This is usually used in healing, where the energy of the chakras can be used to affect organs and glands deep under the skin of a body, but can also be trained to be used in remote activities like telekinesis.

A common practice involving the hand chakras is to hold them towards each other as if they were holding a ball. After 30 seconds, many experience a magnetic, invisible force preventing them from separating or pushing together. This phenomena is often called a psiball.

When a practitioner has successfully activated both the third eye and pineal gland, they're then said to be able to see exterior influences around the body. Many people, especially skilled manipulators and parents, have long cords attached to the auras of others to maintain a steady control and influence. These cords are attached directly to the aura, and sometimes to individual chakra points.

There is no evident science made on this subject, which makes it hard to prove or discuss. Most occult schools believes that aura attachments are indeed possible to manifest through black magick and by simply spending time emotionally with another person. Many believe it is possible to remove attachments by the use of simple visualizations and mantras followed by meditation. The individuals who manifests the attachments for their benefit, are usually called: Manipulators, psychic vampires and Puppeteers.