From para.wiki
(Redirected from Crown chakra)
Jump to navigation Jump to search 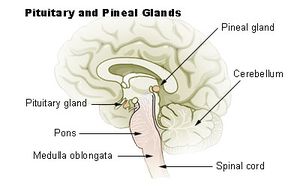 Picture of the seat where pineal gland is

The pineal gland, also known as pineal body, conarium or epiphysis cerebri, is a small endocrine gland in the vertebrate brain. It produces melatonin (a serotonin derived hormone) that affects the modulation of sleep patterns. The shape resembles a tiny pine cone (hence its name) and is located in the epithalamus near the center of the brain, tucked in a groove where the two halves of the thalamus join.

Although not proven by science, a lot of spiritual practitioners believes that the pineal gland also secretes a psychedelic compound called DMT (Dimethyltryptamine). Though the drug is classified as hallucinogenic, many believe that the substance helps separating the conscious mind from the body, as when Astral Projecting, but through brutal force involuntary. At the moment of birth and death, the pineal gland is said to release large amount of DMT, as to help with the transition from the physical life to the after life.

In most chakra systems, the pinneal gland is referred to as the 7th, Crown chakra. It is the gateway from the physical consciousness to the astral, higher planes of existence.

A lot of people commonly mistakes the pinneal gland as the 6th chakra known as the Third Eye. Some schools or systems teach that the Third eye together with the astral projection gained through the pineal gland, is the Third Eye.

The pineal gland does not aid in visualization and only works as an eye into the higher planes.

This subject is very sensitive between spiritual practitioners and non believers because there is very little scientific evidence to back this theory up. Many people think that the calcification of the pineal is a natural process which happens over time regardless of diet or spiritual practice. While the believers suggests that the high concentration of toxic minerals and metals in our diet and water supply, collects in our body around the pineal gland, commonly known as brain sand.

Some methods do exist to remove the brain sand according to practitioners which includes some of the following:

Negative charged water, known as distilled or pure water does not chemically carry minerals or metals when entering the body, and will through its negative attraction bind with calcium, fluoride, sodium and many of its mixed states.

It was unknown until very late during 19th century that Vitamine K12 helped bind with the chemicals that accumulates around the pineal gland. Most green and alkaline tasting vegetables like Broccoli contain a high amount of Vitamin K12.

The brain sand will easily detach from the pineal gland through the use of strong vibrations and vibrating mantras. Just like using a jackhammer on tarmac to crack open the ground, vibrations will peel of the minerals from the gland.

At least one case exist where people have used a magnet head band with multiple strong magnets, all tied with the North pole against the head, would get strange hallucinations which is described as the higher realms accessible through astral projection. Some have claimed that the magnets needs to be pulsing as through the use of a electromagnet in order to actually have an effect. It is not recommended to play with strong magnets, as blood contain iron and could end up clogging towards the strong magnet field.

A copper wire device where the wire is spun like two intersecting cones, one pointing up and the other pointing down, making it look some what like an hour glass. The wire is made in one piece where both cones are connected by the top of one cone, to the base of the inverted cone. By using AC voltage of at least 120V, the antenna will emit magnetic fields that will break open all chakras of the body. This device is dangerous and the voltage is enough to kill anyone who do not know how to handle electric wires, do not attempt unless you know what you are doing.

The pineal gland can easily be triggered and activated, by mere thought and focus on it's physical location. The practitioner visualizes where in his body the gland exists, and can then with its imagination, make a small white light around it as if it was shining. Activation is immediate as long as the visualization is focused and not distracted by other thoughts. Many people fret that it is not working, but this is due to the inexperience and non use of the gland from the past, since the gland is trained like a muscle.

Around the gland are several muscles that activates at the same time the gland is activated. The muscles squeeze and puts pressure on the gland and its location, to the point where the gland is activated and start secreting its substances. After the practitioner becomes experienced, thinking about the gland will not be necessary, because he or she can then activate the gland just by using the actual muscles. It will be of great importance to know how to manually activate the pinneal gland, because then the mind can focus on something else, while the practitioner uses the muscles at the same time.