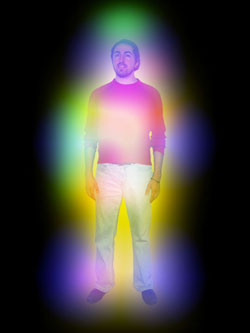 Visual representation of the aura.

An aura is a field of energy existing or emanated by everything or just living organisms, depending on the theory. When inanimate objects are said to have an aura, it's typically described as being unchanging, while the auras of organisms change based on mood, physical health, and thoughts, among other factors. It's believed by many schools of the occult and spiritualism that the aura is the result of the chakras working together, creating different colors from the rainbow spectrum. The aura may also be the etheric body, which is said to be the embodiment of consciousness.

Depending on the health and mood of the individual, the aura will shine with different saturations and vibrancies, often of many different colors. Many clairvoyants report that the auras of healthy people are vibrant and bright in color, while those who have emotional or physical maladies have a dark, thick aura.

The aura is not typically visible through ordinary means; some say viewing it with the mind's eye is the only way to see it. Focusing 1.5 meters behind the subject can allow one to see what looks like an aura, though many doubt it's real, suggesting it's really the after-image of the retinas.

Kirlian photography is supposedly able to capture the aura.[1]

Many believe people are naturally capable of seeing auras without any special training, offering this as an explanation for halos found in ancient artwork, and further suggest that young children see them easily, but forget about them when they see other people ignoring the auras.[2]

Some claim crystals are capable of affecting the aura, and consequently mood and behavior. Under these perspectives, crystals emit a particularly strong aura which greatly affects the easily manipulated living aura. Proponents of the power of crystals typically believe different crystals affect auras in different ways.[1]

There are a few theories as to why auras exist and behave the way they do under the assumption that they do. Some say the aura is the excess energy from the energy system which clings to a physical form until it's whisked away by ambient energy. Those in the New Age movement claim auras are a form of electromagnetic radiation, though hypersensitive EMF detectors have failed to confirm this.[1]