A crystal is a solid whose molecules are arranged in a set repeated pattern throughought all or most of the material.[1] Crystals are often used in magick, as they are believed to be energy conductors, and subtle energy healing. Particular crystals are said to have set abilities or attributes which may factor into a work. Practitioners believe they must be cleansed and "programmed" to enable proper usage, though the extent to which this must be done and how depends on the tradition and beliefs of the individual.[2]

Occasionally, non-crystalline stones or materials are said to have similar magickal properties. Such materials include amber, coral, and pumice.[2]

Many, particularly those in the new age movement, believe crystals to have particular properties which aid in a variety of tasks. These vary wildly from speeding up the healing of certain ailments to the enhancement aspects of one's psychic abilities. In addition, they're said to be wellsprings of their individualized form of energy, and thus often used in magickal practices.[3]

It's suggested by many that crystals are "alive" and conscious, and can be communicated with using a form of telepathy. Consequently, proponents of this idea usually suggest Earth is a conscious being composed of the many crystals of which it's composed.[4][5]

Those more nature-oriented suggest gathering stones personally rather than buying them to avoid any negative energies they may have picked up in their handling, possibly "asking the Earth," performing a small ritual, or giving offerings.[3]

Many suggest cleansing crystals of any energies before each use. This can be accomplished in a number of ways:[3][2][6][5]

Crystal programming is the process by which a crystal's abilities are focused on a desire. Many say a crystal should be cleansed each time first. To program, hold it in your dominant hand and focus your intent on the crystal. Additionally, one may want to telepathically contact the crystal and communicate their desire.[6] 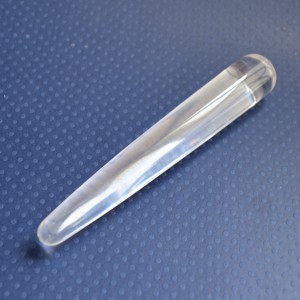 Example of a crystal wand.[7]

A crystal wand is a long and thin crystal (usually Quartz or selenite) which may have an assortment of metal coils and smaller crystals attached. Both ends of the wand can be pointed or rounded. While most are polished, some will keep the original edges of the crystal. Crystal wands are generally used for the purposes of focusing energy and intent toward wherever the crystal points.[8] 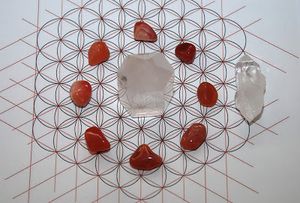 Example of a crystal grid.[9]

A crystal grid is a collection of crystals placed around an area, energetically linked together, and collectively programmed to perform a particular task. General uses of grids include protection (from negative entities), better health and mood, etc. The crystals are usually linked together using a crystal wand, "pulling" an energetic line with you between each crystal pair.[10]

Very little, if any, public scientific research has been done on the purported magickal properties of crystals. All such properties are thus determined by some mix of hearsay, anecdotes, and personal experience, having no strict scientific backing.