For the webcomics based on this meme, see Pill comics 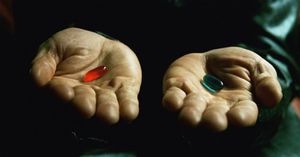 Morpheus hands both pills to Neo

The red/blue pill meme originated from the movie The Matrix. It refers to the choice Morpheus gives to Neo between living in his untroubled ignorance (by taking the blue pill) or learning the painful truth about reality (by taking the red pill). From this, the pills have become pop culture symbols representing similar choices, particularly with respect to learning the "truth" behind conspiracy theories.[1]

The terms red pill and blue pill is mostly used on the /pol/ and /x/ boards, where it spawned the greenpill meme, as well as a series of comics based on it.[2]