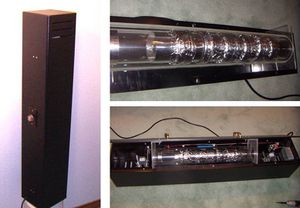 The luminator is a tower-shaped device about four feet (1.3 meters) in height invented by engineer Patrick Richards in 1983. It was designed to improve the energy efficiency of office AC units by balancing the temperatures from floor to ceiling and wall to wall.[2] Inside is a Plexiglas barrel lined with rings filled with water-based liquid which "act like a crystal". Two counter-rotating fans, one on the top and bottom, pull air into the unit at the bottom and blow it out at the top. Reportedly, there are only 9 luminators in existence.[3][4]

The water-based liquid in the rings of the luminator are meant to carry charged intent, as one charges crystals with intent, and Richards programs each unit individually before shipping.[4] It's likely these were added later to facilitate the unusual properties exhibited by activated luminators. 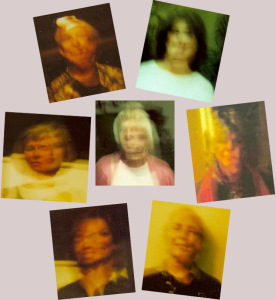 Assorted photos taken by a polaroid camera in the presence of a luminator.[5]

Unusual side effects manifested after the first luminator was installed and activated. Office employees reported improved health conditions, to include back pain and migraine relief. Investigation showed magnetic anomalies and the polarization of light in the office space.[6] Richards further found that polaroid pictures taken around the luminator were more blurry when the subject lacked vitality or "coherence", which became sharper when another photo is taken with a medicine which may improve their condition. Additionally, this observed blurriness/sharpness changed when photos were taken with family members, blurriness indicating strains in their relationship. These phenomena appear in an area of around 30 meters in all directions.[2] Richards refers to this practice as both bioliminal photography and VRIC (Visual Reference of Image Coherence).[4]

Perhaps most astonishingly, at some point Patrick Richards placed three luminators in a triangular configuration spanning two rooms in his house. Turning them on and sitting in the center of the triangle, he felt a strange sensation. As he leaned his head against a wall, it went through the wall. He quickly withdrew his head, turned them off, and hasn't tried the experiment since.[4][6]

Mark Macy, a man who had been organizing research into the afterlife since 1988 and founded several groups dedicated to this end, was introduced to the luminator through therapist Jack Stucki. Polaroid photos taken by Stucki in therapy sessions sometimes caught the faces of spirits in addition to the aforementioned blurriness associated with wellbeing, an apparently known phenomena. He immediately saw the applications it had for his project, and he bought one programmed specifically for spirit photography in 1999.[3]

Macy's spirit photos have the best results with indoor incandescence or fluorescence lighting with the camera's flash partially taped over, while sunlight and halogen lighting yield poor results. Only polaroid, 35-mm film, and VHS recordings have been shown to produce results (35-mm and VHS were reported to work by colleagues of Macy, though he himself couldn't get them to work). Digital recording methods have yielded no phenomena.[4]

The only public theory of operation suggests the vortex shape created within the device and the crystal-charged intent (though there's indication those may be supplementary to the phenomena) in some way combine to loosen the separation between overlaid planes. Vortices appear in many paranormal theories, and are themselves a phenomena. How this actually causes the phenomena is left unspecified.[4]

No real public skepticism about the purported phenomena has emerged, likely due to its obscurity, though some possible skeptical arguments are relatively obvious. The image blurring may be the result of Macy, Richards, and the therapists who use it may be shaking their cameras purposefully and face recognition a form of pareidolia, though this claim has been informally tested. The lens of the camera may have been altered such that an area around where the subject's face would be is blurred, though blurring doesn't always happen and investigators have brought in their own cameras for testing. The photos may have just been photoshopped, which is nearly impossible if it's accepted that the photo comes directly out of the camera for clients to see.

The offered explanations for the phenomena, however, come off as fairly pseudoscientific, in the sense that they contradict or abuse established scientific ideas, even when they don't offer any further explanation as to why they did so. Some may have an inherent problem with the paranormal nature of these explanations, though despite this the phenomena, if existent, would still suggest airflow can in some way affect analog recording devices.