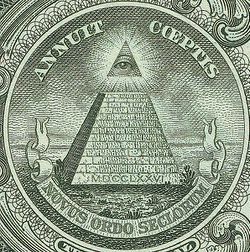 The "Eye of Providence" as it appears on the US one dollar bill.

The Illuminati (plural of Latin illuminatus, "enlightened") is a name which may refer to one of several real and hypothesized organizations. Historically the name refers to the Bavarian Illuminati, an Enlightenment-era secret society founded on May 1, 1776 by Adam Weishaupt. Although the Bavarian Illuminati were anti-monarchists, secularists and classical liberals, the name "Illuminati" has since come to have very different resonances in the popular imagination.

In modern conspiracy theories, "Illuminati" tends to refer to a small secretive elite which is claimed to have infiltrated the political, economic and cultural fabric of society for their own gain. Ultimately they intend to establish a totalitarian world government commonly referred to as the "New World Order". The Illuminati are said to pursue this New World Order by manipulating the economy via central banking and manufacturing conflicts via staged terror attacks.

Illuminati conspiracy theories have a long history. Following the French Revolution of 1789, many pro-establishment writers sought to explain the revolt of the peasantry against the monarchy. Some, such as John Robison and Abbé Augustin Barruel,[1][2] concluded that they had been manipulated to work against their own interests and the interests of the monarchy by the Bavarian Illuminati. Later writers such as Nesta H. Webster would turn to these theories in attempting to explain the rise of international communism in their own era. [3]

Eventually these theories would cease to concern an outside threat of subversion by revolutionary organizations and become claims of internal manipulation by a moneyed elite. Professor Carroll Quigley would publish, after much difficulty, his voluminous history of the world, Tragedy and Hope, which contained references to the previously unknown activities of a secret society founded by Cecil Rhodes and Lord Alfred Milner. This society, he claimed, operated "in the way the Radical right believes the Communists act", but did so with the goal not of establishing communism but instead of founding a global empire.[4] This information was then merged by some theorists with preexisting Illuminati conspiracy theories.

In time, "Illuminati" ceased to denote revolutionary infiltration as described by Nesta H. Webster and instead referred to a political and economic elite more along the lines described by Professor Carroll Quigley. Some would combine these seemingly contradictory images, however. Antony C. Sutton, for example, claimed that an Anglo-American secret society had funded both communism and fascism in an attempt to create oligarchical states which posed as anti-capitalist but which were in fact owned and controlled by those same capitalists.[5]

The mind-bogglingly contradictory and all-prevailing character of the alleged "Illuminati" was later seized upon by satirical writers Robert Anton Wilson and Robert Shea. As editors of Playboy magazine in 1969, the two were bemused by letters they would frequently receive from conspiracy theorists claiming recent world events were the result of Illuminati schemes. As part of "Operation Mindfuck", Wilson began sending letters to various conservative organizations claiming to be a member of the Illuminati. The pair also began to embed information about the Illuminati in left-wing publications, introducing the Illuminati to the counterculture for the first time. The Illuminati would later become the central antagonists in their psychedelic cult classic trilogy, The Illuminatus! Trilogy.[6]

In an ironic twist on the pro-monarchical origins of Illuminati theories, writer and speaker David Icke began publishing a series of books in which he alleged that the royal bloodlines of the world were engaged in a conspiracy to establish a New World Order. Icke claimed that these bloodlines - which he refers to as "the Illuminati" - were in fact reptilian humanoid extraterrestrials.[7] 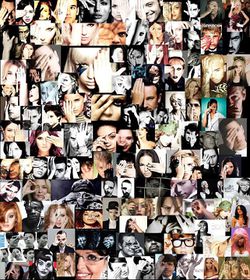 Covering one eye is a very common trend among celebrities.

The symbol most commonly associated with the Illuminati is the Eye of Providence as found printed on the 1 USD bill. The symbol has been used for centuries to refer to the Holy Trinity and God[8], but some conspiracy theorists believe it as reflective on the structure the society as well, with the elite at the top.

Many celebrities and singers have done photo shoots some time during their career where they cover one eye with their hand. This is suggested by proponents to be indicative of influence or symbolism related to a perceived negative secret society, usually generalized as "Illuminati".

In cities the alleged group has helped build or found, the architecture shows many square obelisks, Roman-era statues, road grids built with perfect symmetry and symbolism, Egyptian animal statues, owl statues and occasionally a statue of a bull with large horns. It is however not confirmed if these were built by a mixed group of people from Masonic lodges, the alleged Illuminati, or a combination of both.

One common conception of the Illuminati is that it exists as a shadow government controlling the world from within a secret society, often thought to be Bilderberg Group or the Freemasons. Because of this, any groups associated with the name act as scapegoats for everything related to the Illuminati both in symbol and name. Some believe news reports, media, and actors or singers who disparage the idea openly are doing so as a cover for the conspiracy. Many singers put known Illuminati symbols in their music videos and lyrics, which leads many to believe they're part of a big conspiracy or secret society, though some have criticized this as simply being an attempt to advertise to those familiar with the symbology.

There exists a notion that the Illuminati exists as a shadow government controlling the world from within a secret group or society (Bilderberg Group, Freemasons, etc.). Thus both fictional "Illuminati" groups and the original Bavarian Illuminati (along with many other secret societies, as well as occultism in general) take the blame for everything related to the negative accusations commonly found in YouTube videos. It is very common among news reports, media and with actors or singers, to discuss it openly but with a condescending tone as to imply that there is a conspiracy. Many singers with label groups tied to Warner Bros. Studios, Sony Music Entertainment and others, put esoteric symbolism in their music videos and lyrics. This misguided advertisement then leads to many young adults to believe that singers and pop-stars are part of a big conspiracy or secret society. [9]

The term Illuminati today refers to the secret group which uses its great power of influence to hide their symbols in popular culture and architecture to show off their status. It's not widely known if this group exists or if it's the original Bavarian group, but the name Illuminati is commonly used to describe the symbolism. 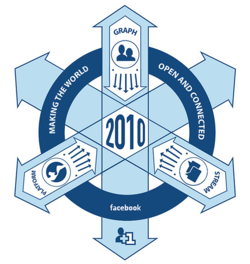 During the All Things Digital Conference in June 2010, Mark Zuckerberg wore a hoodie shirt with a symbol on the inside of the back. The symbol shown to the right, shows a symbol Zuckerberg stated was his Mission for Facebook. The female interviewer was stunned by it, saying, "Oh my God... It’s like a secret cult..."[citation needed]

It's rumored he's actually a member of a shadow group that cooperates with governments to push the agenda of the New World Order.[citation needed]

In the beginning of 2014, Katy Perry released a music video that shocked many on the Internet. The video contains many themes from ancient Egypt with animal dressed dancers, colored tattoos, and details on Katy's hair and face.[clarification needed] There's also a part in the video where she uses magical powers to pulverize different guests that approach her with gifts. In some parts in the video, she appears singing while Egyptian text scrolls over the screen and falls down in the background. A controversy was sparked among some Muslims, as one of the guests she pulverize wears a necklace with the word Allah, and a petition on Change.org reached over 65,000 signatures to take the video down.[citation needed]

While not rife in symbolism, in this video Rihanna covers her eyes several times in the beginning, and later stage fits herself inside a silver tetrahedron while dressed in silver. When she sings in black clothing with an umbrella, the scene is covered in a white-gold gradient that later reverses after she's performed some of her choreography.[clarification needed]

The video starts with a typical masquerade scene taken from what looks like one of the parties the elite are rumored to go to, with people wearing animal masks. The dance moves in the video is mesmerizing and at many points in the video is Gaga dressed very symbolically. Later, goat head decorations can be seen hanging on the wall which is are a common symbol for Baphomet.[citation needed]

The performance starts with people dressed as old roman soldiers, carrying Madonna on a carriage decorated in gold with Egyptian statues. She undresses the golden coat and then look like a dark Athena while dancing sexually on the throne chair behind her. A dancer dressed as a black angel with silver wings and a harp dances while Madonna sings. On the ground in front of the stage are projected images that create the illusion of cards being flipped on a table while multiple images are shown with different symbols.[citation needed]