A rune is a symbol from any of several similar ancient Germanic and Norse alphabets, each symbol having a magical meaning and word association as well as a phonetic one. Some runes also have reversed meanings if there is a difference when they are drawn upside-down.

Although there is no direct evidence that these symbols were used in divination, modern practitioners have adopted these sets of symbols to the purpose, drawing upon a mistranslation of Tacitus' Germania.

The most commonly used set is known as Futhark, named for the first letters in its alphabet. The old Germanic Futhark is separated into three sets of eight letters, called aettir (clans), for the purposes of storytelling with the associations of each rune. Later Norse versions usually had only sixteen letters. The alphabet is as follows:

There are multiple divination techniques for runes. Some involve casting a handful of some or all across a (possibly marked) surface and reading them by their positions; others involve drawing runes in a sequence out of a bag. Two common drawing methods use three and five runes.

Runes which are drawn face down may be considered 'reversed'--the quality embodied by that rune is somehow blocked, or not expressing its full potential--but it's not clear if this is historically accurate or just a carryover from the idea of reversed tarot cards. 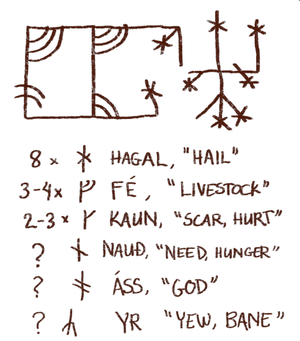 The runes figure prominently in many Icelandic grimoires (the earliest ones dating from the 16th Century and the latest from the early 20th Century) containing magical characters, similar to the sigils used in European grimoires at the time. These books play a prominent part in many of the documented witch trials in Iceland in the 17th Century. In many cases the characters are composed of runes representing the forces called to play in the spell. This can be done easily by arranging the runes in a character or glyph that figuratively depicts the action to be performed when the meaning of the runes is considered. Usually this practice is enhanced by the use of certain materials (types of wood, blood etc.) pertaining to the symbolic power of the spell. Consecration and invocation (especially prayers to god or magical poetry), while not necessary, may also used in combination with the creation of the magical object.

Another way of doing this is to create a "bound rune", i.e. combining all the runes that make up a name or a word at the stem. This practice and others used in these early modern spell-books may well be authentic surviving remains of Old Norse rune magic, about which very little is known.

The very essence of rune magic seems to be that they function as self-contained force-carriers. They can be used by anyone, by themselves or in combination with other magical means. No special preparation, meditation, pact or even state of mind is needed. This apparent simplicity makes them all the more difficult to use. The key word is knowledge. Ingenuity and improper use can result in the runes' effects being entirely reversed or even rebound on the practitioner with unforeseeable consequences.