From para.wiki
Jump to navigation Jump to search
This article is licensed under the CC BY-SA. It uses material from the Wikipedia article "Black-eyed chidlren". You may wish to read an explanation of Why are we using content from wikipedia.org? 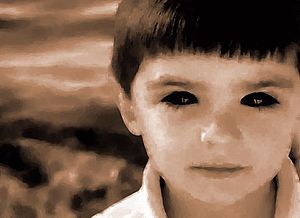 An artist's impression of a black-eyed child

Black-eyed children (or black-eyed kids) are a contemporary legend of supposed paranormal creatures that resemble children between the ages of 6 and 16,[1] with pale skin and black eyes, who are reportedly seen hitchhiking or Template:Citation needed span, or are encountered on doorsteps of residential homes.[2][3][4]

Reports of black-eyed children usually have them requesting to enter something, either a house or car. Initially, witnesses don't see anything wrong and have a vague sense of dread. After focusing, they notice that their eyes are black and are overcome with terror, usually running away or refusing entry.

While tabloid coverage of these creatures has claimed that tales of black-eyed children have existed since the 1980s,[5] most sources indicate that the legend originated from 1996 postings written by Texas reporter Brian Bethel on a "ghost-related mailing list," relating two alleged encounters with "black-eyed kids." Bethel describes encountering two such children in Abilene, Texas in 1996,[6] and claims that a second person had a similar, unrelated encounter in Portland, Oregon.[1] Bethel's stories have become regarded as classic examples of creepypasta, and gained such popularity that he published a FAQ "just to keep up with demand for more info about the new urban legend."[2] In 2012, Brian Bethel told his story on reality TV series Monsters and Mysteries in America. He wrote a follow-up article for the Abilene Reporter News, describing his experience and maintaining his belief that it was legitimate.[6]

In one sighting, two black-eyed children, a boy and girl, wanted to enter the witness' house to wait for their parents. Against their better judgement, they allowed them. They sat on a couch and waited for 20 minutes, then said their parents were there and walked into the bathroom. When the witnesses opened the door, they were gone. Afterwards, they had symptoms characteristic of radiation poisoning, their pets died, and their relationship fell apart.[citation needed]