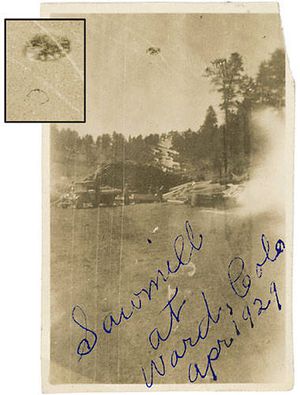 Photograph of the UFO.[1] Sepia photograph. The UFO appears as a shiny boulder-like object.

In April 1929 at a sawmill in Ward, Colorado Edward Pline heard a "terrible thunderous bellow"[2] and took a photograph of a large round object rising up in the near distance that flew off. The sawmill workers never saw a thing but they had heard the noise and felt the ground shake. The story is told by his daughter Hetty Pline. He died a few years after this incident.

The photo was taken at a sawmill in Ward, Colorado in April 1929.