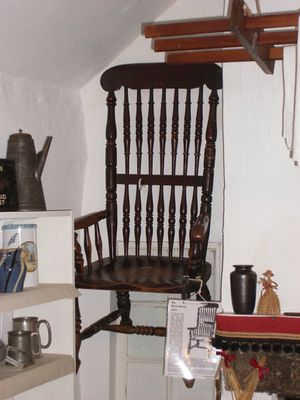 A picture of the chair in the Thirsk museum.[1]

Thomas Busby's stoop chair is a legendary stoop chair supposedly cursed by its owner in 1702 just before execution for the murder of Daniel Awtey. According to legend, sitting on the chair brings untimely death, sometimes mere hours after contact. The chair is currently hung from a ceiling in the Thirsk museum in Yorkshire to prevent patrons and staff from accidentally sitting on it. It's claimed that 63 people have died because of the curse.[2][1][3]

Thomas Busby and his father in law, Daniel Awtey, were partners in a counterfeiting business taking place in Awtey's Dannotty Hall in Thirsk, Yorkshire. Busby and his wife Elizabeth lived in a nearby inn. For unknown reasons, Awtey came to take his daughter back, though she refused to move until Busby returned. When he returned home drunk, the two broke into an argument. Awtey argued about wanting his daughter back and Busby because Awtey was sitting in his favorite chair. 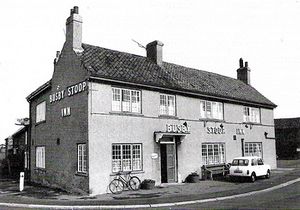 Sometime after the argument, Awtey returned to Dannotty Hall without his daughter. Later that night, Busby went to Awtey's estate and bludgeoned him to death with a counterfeiting hammer (other versions say he was strangled). His body was hidden in nearby woodland, and after a search for the missing Awtey, Thomas Busby was arrested and tried for murder.

After his trial, he was condemned to be hung and his body dipped in pitch and left on gallows on a road leading into Thirsk. As he was being led to his execution, he supposedly cursed anyone who dared sit in his chair. The inn he previously owned thereafter became known as the Busby Stoop Inn.[2][3]

There are some reports of a shadowy figure on the second floor of the Busby Stoop Inn which some say is Busby's restless ghost.[2][3]

Some speculate that the curse isn't real and all the stories are misreported. Additionally, Dr. Adam Bowett, a furniture historian, has claimed that the chair in the Thirsk museum is unlikely to have been made before 1840, and may have been made as late as 1900. Even the story of the chair and its curse are only formally recorded in the mid-19th century as speculation.[2][3]

Busby's chair made in appearance in the 26th episode of the anime w:Hetalia: Axis Powers[5] In it, the legend is changed to Busby sitting in the chair as if possessed and then dying on the spot.