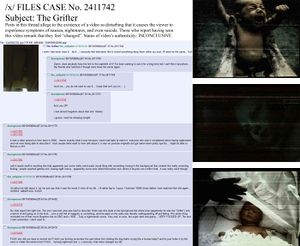 A cap of the original thread with what would later be spread as screencaps from the video.

The Grifter ("Grifter" meaning "con artist") is a fictional film first posted about on /x/ said to drive people to insanity upon watching it. Since then, /x/ users have persistently referenced it and replied to threads confirming its existence, all in order for cheap trolling and baiting hapless newfags. The images that were commonly posted as screencaps are in fact from the film Little Otik, as evidenced by its trailers.[1]