The Books of Sand 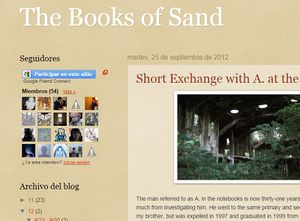 The front page of the blog.

The Books of Sand is a blog that archives a series of anecdotal narratives discovered in a composition notebook.

The author, who goes by "L.B." (standing for "Little Brother"), is an adolescent who lost his older brother in a car crash some time in 2010. In the following year, he searched his brother's room for a particular notebook he suspected him of keeping. Upon finding it, he read it obsessively. The contents of the notebook varied, from descriptions of strangers (described by L.B. as having a quality of "nostalgic voyeurism"), to interviews with people of the city on various subjects. Upon more thorough reading, it was found out to be a collaborative project between his older brother (who is referred to as B) and his friends, deemed The Books of Sand. The focal point of the notebook are the narratives, which detail ominous events that supposedly happened in the history of "B" or his friends.

L.B. states his uncertainty towards the validity of these stories, although he remains open minded due to the familiarity of some of the person, places, and events mentioned.

The stories of this blog were originally posted to /x/, where they garnered some attention[1].

"After reading most of the material, which was originally discovered on May of 2011, I began to post excerpts of the notebooks on 4chan's board /x/, as it seemed like something that would pique their interest. (It apparently did.) Now I have decided to start this blog in order to keep the entries in one, easily readable place as I continue to transcribe them."

He is believed to be Argentinian, due to stories mentioning locations located in and around Buenos Aires, Argentina.

As of September 25th 2012, there have been no new posts on the website. The users of the comments section have expressed disappointment over this inactivity, speculating that the site may be permanently out of service[2].