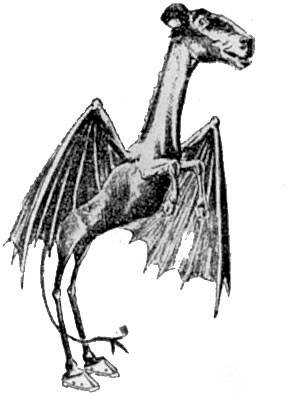 One of the most popular sketches of the Jersey Devil.

The Jersey Devil is a legendary cryptid from Pine Barrens in New Jersey, said to have appeared between 1735 and 1857, depending on the legend. Most if not all records of sightings before the 20th century have been lost or destroyed. Because of this, many separate the sighting history into three parts, before during and after a well known event on January 16-23 1909. The last known sighting of it was 1993 by a forest ranger.[1]

The description varies somewhat between sightings, though always retaining some key elements. A popular description which many sightings corroborate is as follows:

It was about three feet and half high, with a head like a collie dog and a face like a horse. It had a long neck, wings about two feet long, and its back legs were like those of a crane, and it had horse's hooves. It walked on its back legs and held up two short front legs with paws on them.

Other sightings say it has horns or a tail, glowing eyes, is up to seven feet tall, or resembles an "average sized caveman."[3][2]

The Jersey Devil has been described as making a wide range of sounds, including barking, hissing, screaming, and screeching.[2][3]

Most sightings claim the Jersey Devil has wings and can fly. It's had numerous reports of mutilating and possibly eating cats, dogs, chickens, ducks, geese, and sheep. Around 1961, two couples parked in a car heard a loud screeching noise, and suddenly the roof of their car was smashed in. They fled, only to return to see a creature flying along the trees.[2] One report from the 1909 incident claimed it was able to breathe fire.[4]

Other than its apparent several hundred year lifespan, the Jersey Devil also has many reports attesting to it being mortally wounded or dying with more sightings appearing soon afterwards.

In the early 1800s, Commodore Decatur fired a cannonball at it while it was flying without any observable effect. In 1909, a track walker on an electric railroad saw it fly into the wires above, causing a violent explosion which melted the track 20 feet in both directions. No body was found, but it was later seen in perfect health. In 1957, the Department of Conservation found a partial skeleton with feathers of an unidentified creature, causing locals to think the Jersey Devil was dead, though it soon reappeared.[2]

So many versions of the legend of the Jersey Devil exist in such variation that none of them can be said to be the "definitive" version. However, most are variations of a smaller selection of scenarios and themes:[2][1][5]

In 1740, it's said a clergy exorcised the Jersey Devil for 100 years, though there's no written record of this and there are some sightings within that time.[6] In 1909 from January 16th to the 23rd, thousands of people claimed to see it from Pennsylvania to New York.[3][4]