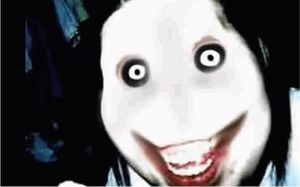 The image commonly used alongside the creepypasta, and previously as an image reply on /x/.

Jeff the Killer is a creepypasta that has gained popularity on the internet. The image existed long before the creepypasta was created; it was originally an image commonly posted with a "Go to sleep" caption. It is believed that the supposed image of Jeff (pictured right) is a photoshopped image of a girl named Katy Robinson who supposedly killed herself after abuse from images she posted of herself on 4chan. These claims have some weight based on comparisons (though it was certainly a different image of her), but the original image has not yet been found despite many posters claiming to have been in the original thread. There exist two images of this face: one is believed to be the original photoshop, while the one commonly used with the creepypasta seems to have come later. 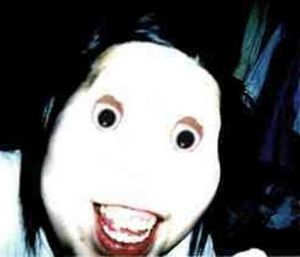 Thread describing Katy Robinson's supposed suicide. Her death is quite possibly a troll, but she was posted on /b/.

In 2008, a user on Newgrounds named killerjeff posted the image.[1] with the image. This is possibly where the creepypasta's author got the name from.