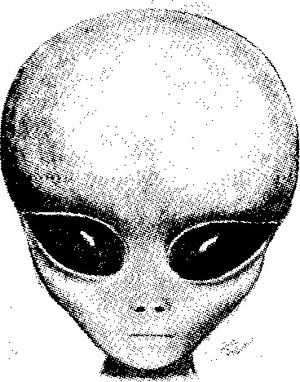 Greys are one of the most commonly reported alien species in abductions, so-called for their characteristic grey skin. Greys are typically described as having flawless, light grey skin, a slender frame, bulbous heads, small or nonexistent noses, slitted mouths, and black (sometimes shiny) eyes. Usually they're described as being short (around 4 feet). Many encounters report them having high level psychic abilities, such as telepathy and/or telekinesis.

Some speculate that greys are clones by the reptilians as a slave race so the reptilians could feed off their negative energy. Others theorize they're humans from a distant future or alternate universe come to Earth for study.

Their home star system is usually said to be either Zeta Reticuli and the Bellatrax. The first reports of greys seemed to surface after the Roswell incident.

Some sources claim greys are infertile for reasons unknown, which is offered as an explanation for their abductions (acquiring genetic material to fix the infertility). These theories usually say this abduction is done in conjunction with technology exchanges with covert government organizations.[1]

Very few people who go through past life regression claim to have a past life as a grey. One of note is Sanni Emyetti Ceto, author of "Stranded On Earth: The Story of a Roswell Crash Survivor", who claims to be the human incarnation of the Commander of the crashed ship at Roswell.