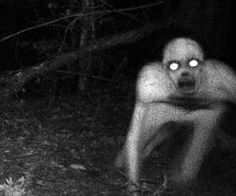 A trail cam snapshot of a fleshgait.

A fleshgait (fleʃ-ɡeɪt) is a cryptid shapeshifter said to be able to perfectly mimic the voice and appearance of animals and humans, even copy their behavior after a period of time. It's believed they can do this by occupying the victim's body or skin. It's unknown just how exactly a fleshgait acquires a body, but the most popular theories state that they either eat the innards and wear the skin, or simply skin the victim and discard the internal organs. It's difficult to determine what method is used due to the fact that little to no physical evidence is found after a fleshgait's attack.

These creatures were originally called skinwalkers, but to avoid confusion with the 'yee naldlooshi', a Navajo witch with the ability to turn into animals, a separate denomination was created.

The short term motivations of fleshgait are clear - steal a human identity, adapt to survive amongst humans, and find more humans to kill and steal their identity. Their long term goals are unknown, if there are any.

A fleshgait will wait for a small group of humans to enter their territory, wait for one of them to become separated from the group or listen for mimicable phrases, and then lure or trick someone to be killed. Before an actual attack, the presence of a fleshgait is indicated by unexplained noises and/or objects being moved while nobody is looking. The attack itself is shrouded in mystery, simply because their goal is for the victim to be alone.

Once an attack has occurred, the victim will no longer act like himself. The most telling sign that an attack has occurred is the complete lack of personality, even if the victim wasn't very expressive beforehand. Often, the victim will simply stare off into space, examine objects quizzically, or pay extra attention to any conversation going on around them, all these in an effort to mimic humans. These signs may fade after a period of time once the fleshgait learns more about human behavior and what its victim used to be like, but they will never completely disappear.

Once a human body has been secured, the fleshgait will likely try and lure others into the woods to claim other victims. It will try to make excuses to return with someone, such as a need to go to the restroom, a fear of being alone, or requiring assistance with a chore such as gathering food or firewood.

Fleshgait have been reported to appear in a variety of environments ranging from woods to tundra, and according to some reports, even in human society after a successful consumption of a victim. Although not exclusive to these areas, they're often encountered in off-limits locations such as illegal camping sites or military training grounds, as well as hard to reach locations such as cliff faces. It's heavily advised to avoid such locations if going innawoods recreationally. However, a fleshgait can also be encountered uncomfortably near human society, including in well known campsites or in forests across the street from a suburb.

A fleshgait that has recently acquired a body will be jumpy, and be extremely wary of being attacked or identified by other humans. A good way to determine if someone you know has been fleshed is to ask it personal questions that have not been discussed in the camping trip the victim will definitely know, such as "what's your dog's name". Regardless of whether the answer is right or wrong, pretend they got it right, but if it's wrong, be on high alert.

The voice mimicry of a fleshgait is perfect, but its phrases are severely limited and repetitive. Examples include "help", "hey _____", or something that it heard while eavesdropping. The pitch and intonation of the phrases will sound identical every time, almost like it is playing them as a recording, instead of actually uttering them.

One encounter seems to indicate that fleshgait are weak against drugs.[1] A person who was fleshed was given a large dose of heroin, and subsequently expelled the creature from the body. However, judging by the scene the following morning, this only angered the fleshgait.