Religion as a Product of Psychotropic Drug Use

The notion that hallucinogenic drugs played a significant part in the development of religion has been extensively discussed, particularly since the middle of the twentieth century. Various ideas of this type have been collected into what has become known as the entheogen theory.

The book “The Road to Eleusis: Unveiling the Secret of the Mysteries”, makes a case that the psycho-active ingredient in the secret kykeion potion used in the Eleusinian mysteries was most likely the ergotism causing fungus Claviceps purpurea. Furthermore the book introduced for the first time the term "entheogen" as an alternative for terms such as "psychedelic", "hallucinogen" and "drug" that can be misleading in certain contexts.

The book “The Apples of Apollo: Pagan and Christian Mysteries of the Eucharist” (2001) explores the role that entheogens in general, and Amanita muscaria in particular, played in Greek and biblical mythology and later on in Renaissance painting, most notably in the Isenheim Altarpiece by Matthias Grünewald. 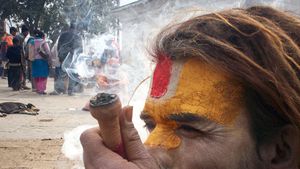