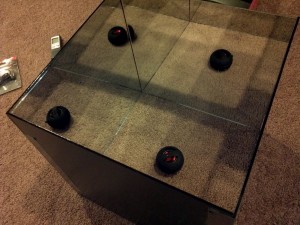 A devil's toybox is a box formed from 6 inward-facing square mirrors (though some suggest any platonic solid will work[1]). Supposedly, after several minutes of assembly, strange noises, including growling, can be heard. It was popularized and invented by Joshua P. Warren.[2][3] Additionally, traditional EVP has been reported to occur, and phenomena is found to be more pronounced in haunted houses (though it still occurs without).[1] 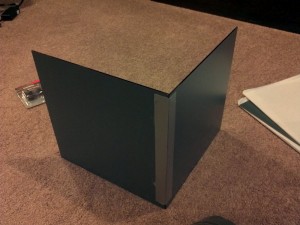 Most explanations for the phenomena suggest that spiritual energy is able to get into the box, but the mirrors reflect it back inwards if it tries to escape. Of note is also the magickal practice of using mirrors to both trap spirits and act as a gateway to other planes.[4][5]

The Devil's Toybox has appeared on the premiere of the Animal Planet show Ghostland Tennessee, in which they used it to trap a spirit, and the popular paranormal podcast Coast to Coast AM.[4][5][2]