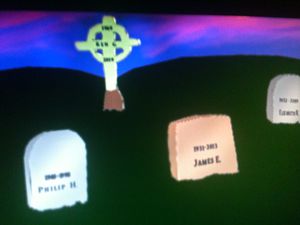 Claimed screencap of the cemetery at the end of the episode. 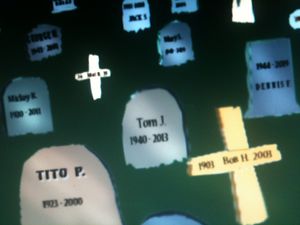 Second claimed screencap of the cemetery at the end of the episode.

Dead Bart is a lost episode creepypasta[1] about a missing episode of The Simpsons. The episode's production number was supposedly 7G06, the number used for the episode Moaning Lisa. Its contents were realistically gory and disturbing, dealing with the character Bart's death in a plane crash. At the end of the episode, a cemetery is shown that supposedly predicts the deaths of The Simpsons guest stars. Along with suicidemouse.avi, Dead Bart is one of the original lost episode creepypastas, appearing on /x/ and becoming memes as a bunch of others were jokingly created, playing on the "weird way of counting episodes", hyperrealistic animation and gore, and dark themes all accounted for in this pasta.

Sometime around 2010 or 2011 (cannot verify due to Chanarchive's demise (not even sure if this was archived)), a poster on /x/ claimed to have the episode, and posted screencaps of the cemetery at the end. The thread would later 404 and fade into obscurity. Looking at the images today, several of the guest stars listed to have died are still currently living. There is no evidence for this episode ever existing.