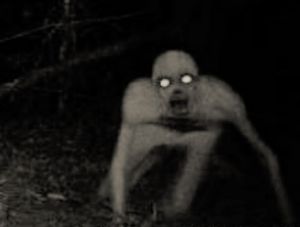 A common depiction of a crawler, though it was first posted with a creepypasta so its authenticity is debatable.

Crawlers, also known as ashmen and palemen (a possible reference to Pan's Labyrinth) are humanoid cryptids known for their distinctive pale, hairless, ashen skin and emaciated appearance. They average 5-8 feet in height upright, but are typically seen crawling on all fours in a hunched position, giving them the name "crawler".

Their faces are reported to have sunken or black eyes, many sharp teeth (or in some cases, no mouth) and no lips or noses. There have been reports of them in the northern parts of North America and Australia.

Crawlers inhabit small, enclosed spaces like caves. They're primarily nocturnal but some have reported sightings during the day. They seem to consume animals of small to medium size, from mice to fauns, though they typically don't attack humans. Despite their appearance, they're unnaturally strong.

Most sightings are at night in open areas, particularly forests or the sides of roads, or during the day in enclosed spaces like sewer systems. On the rare occasions that they do attack people, the wounds are never fatal and they won't give chase. Considering their normal prey, humans are likely too big to be worth attacking. They're known to make a piercing screech when approached.

Because of their nocturnal nature, crawlers can be scared off by bright lights and fire. Gunshots are also usually enough to scare them away.