Cervine Birth is a pasta that first appeared on /x/ (need confirmation that it did not appear elsewhere before that time). It describes an unsettling video project by an artist that was removed from various video sites after complaints. The video involves an unsettling atmosphere, and an albino deer and its giving birth to a human/animal hybrid. 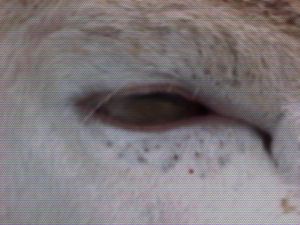 There is no evidence of this video ever existing, or of the artist having uploaded it, however, supposed audio and a screenshot have been uploaded[1] (origin of this audio and image unknown), as well as another alleged screenshot seen to the right.

Another pasta would later surface titled Foxtrot, involving another alleged video by the same artist.