Jadusable's icon for part of the story

BEN Drowned, written by Jadusable, is a famous story from /x/. It's particularly noteworthy for its usage of uploaded videos to add to the believability. 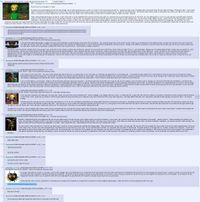 The story is presented as a true retelling of a poster named Jadusable's experiences, with series of blog-like entries coming later. The author finds a copy of Majora's Mask missing its cartridge art at a garage sale run by a creepy old man. After experiencing some odd phenomena in the game, Jadusable goes back only to find that the old man had moved away. The rest of the story details his experiences with the ghost of a boy named Ben who supposedly drowned and went on to reside within his favorite game.

Many[who?] speculated that Jadusable made the story up and his videos were the product of clever ROM hacking. Eventually, some with this experience demonstrated that all of the effects shown in the videos can be done with a typical emulator.[1] Eventually, Jadusable himself admitted to have faked the whole thing, solidifying its status as a creepypasta. Those YouTube fans who were unaware of this were presented with a surprise when he uploaded a video titled "king kong.wmv"[2] on April Fools Day, angering those who still thought of his story as legitimate.