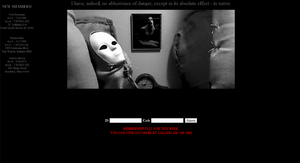 The site as it was originally.

b74287346ef38c3e.link is a website first mentioned on /x/ on 08/04/14.[1] The website contained what seemed to either be live video or constantly changing images of a dark room with a clock, a photo, and what looked like bagged bodies (one of which was wearing a white mask). There was a phone number on the website, and Anons reported that calling it would notify you that a membership team had been dispatched to your location. The site would also track your general location information when you tried to log in, implying that you would be the next "member", and join the bagged "bodies" on the site's supposed video. 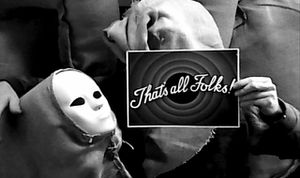 The site after OP revealed the hoax.

The website turned out to be a hoax when, later, the OP revealed in a post that the things in the video were part of his/her Halloween costume.[2] Some time after, when users opened the website they were presented with a new image, reminiscent of the closing credits to a Looney Tunes cartoon show.