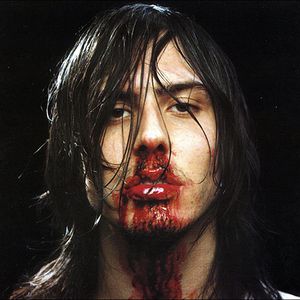 Andrew WK as he appears on the cover of I Get Wet.

Since the release of Andrew WK's debut album I Get Wet, he and his "party" atmosphere have been accused of being a corporately manufactured musical act. Suspicions have been further introduced over the years with the introduction of a person by the name of Steev Mike. Listed as executive producer on I Get Wet (but left off of The Wolf), Steev Mike is thought to be one or more people truly behind the name Andrew WK. Andrew has further provoked suspicion with his inconsistencies in interviews (he has been quoted as saying both that Steev Mike was a name he used to go by, and that a group of people were behind the musical act of Andrew WK).

Andrew WK has a history of silly antics as evidenced by interviews and his YouTube channel,[1] and so it is possible that this whole fiasco is merely a running gag based on something that was previously true (there was a record by an artist under the name of Steev Mike released prior to Andrew WK on his father's label).

Rumors and speculation about this ordeal range from an attempted hiding of a manufactured musical act to body doubles and unreceived musical credits, although nothing has been conclusively proven.

An Andrew WK Q&A session held at NYC's Santos Party House further fueled suspicions. Andrew awkwardly dodged most questions he was asked, and repeatedly fumbled around, spoke nervously, and referred to a piece of paper on stage (both (seemingly) reading from it and rehearsing his actions). Much of this when compared to his other antics, seems like it could be all part of a gag and his image, and so what is really going on is up for debate.