This photo was found in his father's scrapbook by Japanese student Masujiro Kiryu and is thought to show a street in Tiensten during the China Campaign (just before World War II). In another version of the story, the photo was taken by an American or Japanese journalist.

In the sky above the street is a strange looking object. The photo shows people in the photo pointing to the UFO. 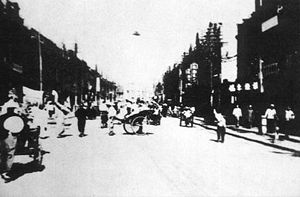 There has been some confusion as to where the photograph was taken. Some sources say a street in Tiensten, Hopeh Province China and others say the city of Tienjin, China. The most common version seems to place the photo in Tiensten.

The UFO appears as a hat-shaped object.

The photograph is quite grainy and hard to make out but the object itself looks quite clear.